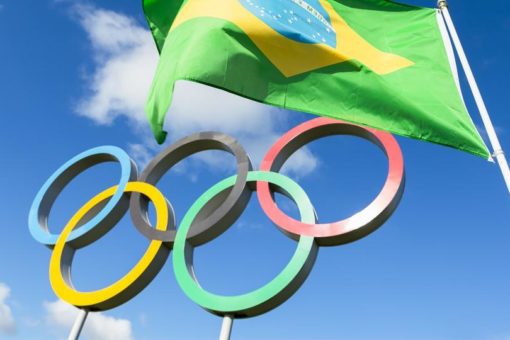 We’re taking it right back to 1894, when French aristocrat, Pierre de Frédy, Baron de Coubertin, an intellectual who had previously attempted to integrate more physical education in schools, summoned a congress in Paris with the goal of resurrecting the ancient Olympic Games (which was Coubertin’s idea suggested at a USFSA meeting in 1889). It was agreed upon by the congress for a modern Olympics, and soon, the International Olympic Committee (IOC) was formalized and given the task of planning the 1896 Athens Games.

In 1912, the Stockholm Games were held – this was the first Games featuring athletes from all five inhabited parts of the world. This design first appeared at the top of a letter that was sent to a co-worker and included the five interlocked rings, drawn and coloured by hand. This ring design was used as the emblem of the IOC’s 20th anniversary celebration in 1914. In 1915, a year later, it became the official Olympic symbol.

In 1916, these rings were to be used on flags and signage, but these plans were cancelled due to the ongoing World War. In 1920 these rings made an appearance at the Games in Antwerp, Belgium.

Although it was never said nor confirmed on writing that any ring represented a specific continent, it seemed a loose interpretation of “continent” was used by Coubertin, that included Africa, the Americas, Asia, Europe and Oceania.

Because the rings were originally designed as a logo for the IOC’s 20th anniversary and only later became a symbol of the Olympics, it is probable that, and according to historian David Young, he originally thought of the rings as symbols for the 5 games that they had already successfully organized.

As with any type of Corporate Identity, the IOC take their rings very seriously, and usage of the symbol is subject to very strict rules and graphic standards, including:

The area covered by the Olympic symbol (the rings) contained in an Olympic emblem may not exceed one-third of the total area of the emblem.
The Olympic symbol contained in an Olympic emblem has to appear in its entirety (no skimping on rings!) and can’t be altered in any way.
The rings can be reproduced in a solid version (for single colour reproduction in blue, yellow, black, green, red, white, grey, gold, silver, or bronze) or an interlocking version (interlaced from left to right; and reproduced in any of the aforementioned colours or full colour, in which case the blue, black and red rings are on top and the yellow and green are on the bottom).
For reproduction on dark backgrounds, the rings must be a monochromatic yellow, white, grey, gold, silver, or bronze; full colour on a dark background is not allowed.

At Digital Drawing Room, we appreciate these branding rules and create similar guidelines for every brand that we create. A brand is something to be proud of, and nobody should be allowed to alter it in any way that may cause visual harm.

If you would like to discuss how we can create a timeless brand for your business, email us on hello@design.digital-hq.com

Any cookies that may not be particularly necessary for the website to function and is used specifically to collect user personal data via analytics, ads, other embedded contents are termed as non-necessary cookies. It is mandatory to procure user consent prior to running these cookies on your website.